Q. What is conspiracist ideation?

Conspiracist ideation is a style of thinking, otherwise known as conspiratorial thinking. It refers to a person’s propensity to explain political or social events as a secret plot by powerful individuals or organizations.

Q. How strong is the evidence linking climate science denial with conspiratorial discourse?

A number of studies independently present evidence linking climate science denial with conspiratorial thinking. One well-known paper (Lewandowsky, Oberauer, & Gignac, 2013; referred to as LOG12 from here on) surveyed blog readers, finding a small but statistically significant link between doubts about anthropogenic global warming and conspiratorial thinking. LOG12 inspired the conspiratorial reaction in the blogosphere that is reported in Recurrent Fury.

This result is confirmed by other studies. Another study involved a nationally-representative sample of Americans (Lewandowsky, Gignac & Oberauer, 2013). This analysis replicated the LOG12 finding of an association between climate science denial and conspiratorial thinking. The size of this effect was small when the conspiracy theories being considered were unrelated to scientific propositions–however, the effect was sizable for an item that directly queried whether climate change is a “hoax”: That idea was endorsed by 20% of the sample and it explained 25% of the variance in attitudes towards climate change generally.

An independent study (Smith & Leiserowitz, 2012) found that among people rejecting the findings of climate science, when asked to name the first thing that came to mind regarding climate change, the most common answer was conspiratorial in nature. 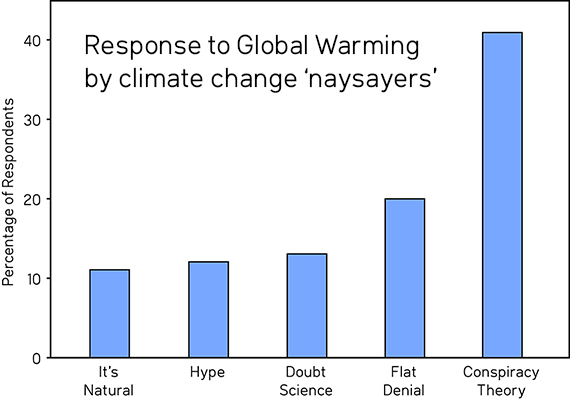 Figure 1: Responses from people who reject the findings of climate science when prompted to report their feelings when prompted with “climate change” (Smith & Leiserowitz, 2012).

Overall, there is now fairly good reason to think that the association between conspiratorial disourse and denial of climate science is quite robust.

Q. Why are the results of Recurrent Fury important?

The results are important for theoretical reasons because they extend the literature on conspiracist ideation as well as on the role of the internet as a staging ground for the rejection of science. Those contributions are outlined in the paper. In addition, the results are pragmatically important because they serve the public interest: There is ample evidence that the public is currently not being adequately informed about the risks from climate change, owing largely to flawed media coverage, to which blogs make a contribution. The public interest is therefore served by opportunities to know what is happening on those blogs, and what type of discourse is used in those blogs.

We do not categorize people at all. There are no “deniers” or “conspiracy theorists” in our paper. We do not categorize people—we examine and categorize blog content, which was produced by people behaving in a certain way of their choosing. There is a crucial difference between categorizing people and their behaviors: Someone who denies scientific facts can tomorrow choose to discontinue that behavior, whereas someone who is characterized as a “denier” (or “warmist” or whatever) seemingly does not have that option open to them.

We describe the content of blogs that arises from people’s behavior, not who they are.

Recurrent Fury includes a rigorous, scholarly analysis of public statements. Despite the fact that the quotes are taken from publicly available websites, the quotes in Recurrent Fury have been anonymised and slightly paraphrased to prevent ready identification of individuals. Our analysis draws on the body of research into conspiratorial discourse. In conducting this analysis, we contribute to the scholarly literature on conspiracist ideation by synthesizing a broad body of research into a single, coherent set of attributes of conspiratorial discourse:

These attributes are identified in some of the recursive theories posted in response to LOG12.

Q. How do you distinguish between legitimate criticism and conspiratorial theories?

An important element to Recurrent Fury is our quantitative analysis that distinguishes between legitimate scholarly criticism and conspiracist discourse. To achieve this, we asked PhD students who were not aware of the LOG12 paper or the controversy following its publication to critically analyze the LOG12 paper. To determine whether these criticisms differed from the criticisms of LOG12 posted on the blogosphere, we had both sets of comments rated by honours students, using 4 of the attributes of conspiratorial thinking (see previous Q for an explanation). The blogosphere comments scored significantly higher on the different attributes of conspiratorial thinking, as shown in the figure below. The dark gray refers to blogosphere comments and the dashed lines enclose the distribution of responses relating to the PhD student critiques. The first four panels show ratings on conspiracist attributes and the fifth panels shows rating on a “reasonable critique” item. It will be noted that for the “reasonable critique” item, the direction of difference between the two types of comments is reversed:

No, not at all. As just noted, Study 3 shows very clearly that the blog content was not judged to constitute a reasonable critique, in comparison to the critical material generated by junior scholars. Study 3 used a blind test in which participants did not know what (anonymized) content they were judging and what the study was about, so this is fairly strong evidence that blogosphere material was not providing a trenchant criticism of scientific work. Although some people may claim that the conspiracism observed on blogs is just a “price you pay” for trenchant skepticism, the present data contradict this possibility. Our results show that the conspiracist discourse in the blogosphere actually detracts from true scholarly analysis.

Q: Are the skewed results really surprising, given that the comments that were presented to participants were identified as exhibiting conspiratorial thinking?

No, the content during the breadth search (for Study 2 and 3) was not selected for conspiratorial content (see Method section for Study 2). It only had to be “minimally recursive”; i.e., refer to LOG12 to be included. In Study 3, the items from the breadth search did not differ from those of the depth search (which did target potential conspiracist content), so the results are surprising because even the content that was not selected for conspiratorial content gave the same skewed results as the items from a search that was more focused on potential conspiracism.

Q: Are the data available?

The data for Study 2 and Study 3 will be made available shortly next to a link to Recurrent Fury in the “publications” tab at www.cogsciwa.com.

Q. How did the authors resolve the potential conflict of interest of analyzing climate bloggers, given some of the authors have at least indirectly criticized these bloggers in the past?

To obtain an independent analysis of the blogosphere discourse regarding LOG12, we hired a research assistant to collect the data, then hired an independent group of people to rate anonymised comments. This removed any possibility of bias in the analysis, and as well as provided a quantitative analysis of the conspiratorial nature of the comments – directly comparable to scholarly criticism of LOG12 by PhD students.

Q. Wasn’t this paper retracted from another journal?

A related earlier paper, called “Recursive Fury”, was peer-reviewed and published in Frontiers in Psychology in 2013. To our knowledge, it became the most-read paper in psychology published by the journal, with more than 60,000 abstract views. After the journal received complaints from a small number of readers, they withdrew the paper in 2014 for legal, but not academic or ethical reasons. Upon withdrawal, a copy of Recursive Fury was posted by the University of Western Australia (UWA) together with an affirmation of UWA’s commitment to academic freedom. The paper was then downloaded a further 13,000 times from the UWA website without the university receiving any further complaints or legal threats.

Recurrent Fury reports an anonymized and greatly extended set of studies that builds on Recursive Fury. Specifically, Study 1 is an improved version of the study reported in Recursive Fury, and Studies 2 and 3 are new and involved blind and naive participants and confirm the initial conclusions from Recursive Fury. The latest paper also tells the story of the events surrounding Recursive Fury and the fallout from the withdrawal.

The pattern of complaints against Recursive Fury has also been observed with the original LOG12 paper, with the journal that published LOG12 receiving complaints about alleged ethics violations and repeated demands for retraction, and the University of Western Australia receiving similar complaints, as well as numerous freedom-of-information requests.

For more information on how complaints and intimidation are used to attempt to silence scientists and curtail their freedom of scholarly inquiry, see The subterranean war on science and the following video from Denial101x: